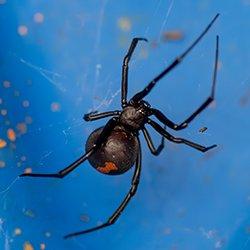 If there is any pest that inspires fear in many people, it’s the spider. There are many different species of spiders worldwide, but even the harmless ones can really gross people out. And there are some people who have severe phobias of any kind of spider.

While there are dangerous spiders in the world, the vast majority of spiders in Hartford County are harmless to humans. In fact, while all spiders have fangs and venom that they use to hunt and kill their prey, most spiders in the United States have venom that doesn’t harm humans.

Even though most of them aren’t dangerous, it’s never pleasant to come across spiders in your home or business. Knowing how to tell spider species apart is a helpful way to make sure you don’t have any dangerous species in your home. Here are common area spiders and how to tell them apart:

Just How Dangerous Are Spiders In The Area?

There are some very dangerous spiders in the world, and the most dangerous of all is the Sydney funnel-web spider Atrax robustus. But, luckily, this spider is found in New South Wales and not the United States.

In the U.S., the only two spiders considered dangerous enough to be medically significant are the black widow and the brown recluse. While it’s not impossible to get them in your home or on your property, they are rare in Hartford County as they aren’t native to the area. For the most part, any spiders you come across aren’t likely to bite you, and if they do, their bites aren’t likely to hurt you. However, it’s still a good idea to be aware of black widow and brown recluse spiders as they can be found in the area occasionally.

Why Do Spiders Come Into My Home?

If you’ve suddenly noticed a lot of spiders in your home, the main reason they are coming inside is that they are looking for prey. While many other species of insects will come inside looking for shelter from the weather of some kind, spiders are predators that are attracted to places where they can find a meal. So, having a lot of spiders often indicates that you have an underlying pest problem. You might have a lot of smaller insects that spiders eat, and this means you might be dealing with more than one pest problem.

How To Get Rid of Spiders

There are some things you can do to deter spiders by making your property less appealing to all pests. Here are some pest prevention steps you can take:

If you need assistance in removing spiders (or the insects they prey upon) from your home, reach out to the professionals here at American Pest Solutions. We are standing by to help.