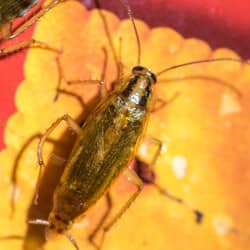 Over the last 2 decades scientists have be documenting the habits of American cockroaches, and they have discovered that individual roaches can actually exhibit personality traits. One might be bold, always adventuring out and exploring new surroundings without fear, while another displays a timid nature, keeping to the shadows until it is sure that everything is safe. These behavioral differences aren't unusual for invertebrates, but scientists like Planas-Sitja, are drawn to study this behavior in cockroaches, because roaches do not have social castes or societal structures. Though they are gregarious (fond of grouping with others), they are each individuals, making it easier to observe their personality differences.

As it turns out, having different personalities increases their ability to survive. If all roaches were adventurous, they would be wiped out in a region with an abundance of predators. The fact that some are timid and shy works to preserve their species. But boldness can be a benefit as well. Roaches with an adventurous and stalwart spirit find food sources that would not have otherwise been discovered. If all roaches were timid, they would die off, due to hunger.

Through much experimentation scientist have also learned that cockroaches, when in a group, share a group mentality. Though they each have their own unique personality traits, they give themselves over to the group. Animal behaviorist Noa Pinter-Wollman say that this, "implies that the whole is greater than the sum of its parts."

The fact that cockroaches have personalities is absolutely amazing, but does that mean you want to spend the rest of your life with them? Sure, beauty is on the inside, but these nasty little insects wallow in filth. They feed on feces. They crawl around in dumpsters, and then crawl around on your silverware. It doesn't matter how much personality they have, they spread illness and disease.

For more information on pest control for your Massachusetts home or business, be sure to give us a shout today!