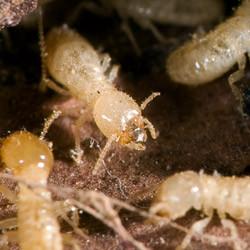 Termites: they're every homeowner’s nightmare. Often referred to as the “silent destroyer,” termites do most of their damage undetected, and the damage they can do is extensive. It is estimated that termites cause up to five billion dollars in damage annually to homes around the United States.

The termite species that causes the most damage is the subterranean termite. Usually working undetected and underground, subterranean termites eat wood 24 hours a day, seven days a week. They can do critical damage to your home, leaving it structurally unsound or, in some cases, causing a total collapse. A small colony of 60,000 termites can eat a 2-foot long 2x4 in less than a year, and most colonies are much larger than that. Because of the damage they can do, it is important for you to be able to identify subterranean termites and signs of their presence, as well as know what you can do to prevent termites in your Western Mass home.

What Are Subterranean Termites?

Subterranean termites are found throughout the country, including here in Western Mass. They are creamy-white to dark brown or black in color with six legs and distinct antennae. They are about 1/8 to 1/2 inch in size and have long, narrow, oval-shaped bodies.

A subterranean termite colony operates in a caste system of reproductives, workers, and soldiers. Each termite has a distinct role and a distinct body type:

In these three roles, subterranean termites work together to eat and survive, quietly destroying your home from below ground.

How To Prevent Termites Around Your Home

Subterranean termites need moisture and a food source to survive. As a homeowner, you can help prevent termites by eliminating moisture and preventing termites from having a clear path to your home with the following steps:

If you follow these simple steps, you will make your home a less likely target for subterranean termites.

Even if you are active in your efforts to prevent termites yourself, there is no substitute for professional pest control. The certified technicians at American Pest Solutions can not only deal with an active termite infestation but help you take steps to prevent a termite infestation from happening. Our Pest Guard system includes in-ground termite monitoring between the months of April and October when termites are active in Western Massachusetts. If we detect the presence of termites, we will switch from monitoring to active termite baiting to eradicate the problem quickly. We will also increase monitoring efforts and take more aggressive action if it is needed. Whether you have an active termite infestation or want to prevent termites in the first place, let American Pest Solutions keep your home and family safe from termites.