Home › Blog › Why Are There Stink Bugs On My Western Massachusetts Property?

Why Are There Stink Bugs On My Western Massachusetts Property? 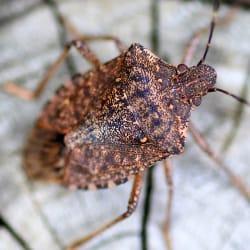 Many pests can make their way onto your Western Massachusetts property but stink bugs might be one of the grossest. While they aren’t as dangerous as other species, such as cockroaches, they are very odd to look at and worse still emit a gross odor when squashed.

Because of this smell, stink bugs are rather notorious, but there are many things about them that the average property owner isn’t aware of. First of all, stink bugs aren’t native to the United States. They are originally from East Asia, but they were brought over in the 1990s and have since spread far and wide across the U.S.

Another interesting thing about stink bugs is that there are many different species. However, the one most commonly found around Massachusetts is the brown marmorated stink bug.

This variety has brown to tan base colors with mottled patterns that allow them to camouflage in nature and a distinctive shield-like shape. They also have a triangular shape on the bottom of their backs that looks like plating.

Why Are Stink Bugs Inside My Home Or Business?

If you’ve noticed stink bugs inside of your property, this usually means they’ve been inside for a while. Stink bugs will come out of hiding in the warmer months and days and are usually found on sun-facing walls. They will congregate together and become quite noticeable. However, just because you only see them when it warms up, doesn’t mean they aren’t there in the cold.

Stink bugs will overwinter inside of walls, attics, and crawl spaces where you are unlikely to notice them. They could be inside your home or business for months before they make an appearance.

Overall, stink bugs are harmless pests. They can’t bite or sting which means they aren’t going to harm you, others around you, or your pets. They also aren’t linked to the spread of any diseases, so you don't have to worry about sickness. However, this doesn't mean you'll want to find them around your property, and you'll want to disinfect surfaces that have been in contact with stink bugs.

Another big problem with stink bugs is that they can be an agricultural pest that harms crops as well as other plants. For non-farmers, they are mostly just a pain as they can damage certain plants around your property.
In general stink bugs are undesirable because they can let off a foul odor, congregate in large numbers, and can be invasive and difficult to remove using do-it-yourself methods.

How Can You Remove Stink Bugs?

While noticing a stink bug or two outside of your home or business usually isn’t a big concern, they can be a very annoying problem if they’ve already established themselves inside the walls. If you’ve noticed stink bugs inside your building, trying to remove them can be difficult because they can spread quickly.

While DIY methods often don’t work very well, there is one effective way to remove stink bugs. The experts at American Pest Solutions can eradicate these insects in no time, and our ongoing residential and commercial pest control plans will also keep them from returning. To find out more about these options, or to request a quote, contact us today by phone or send us a message online.