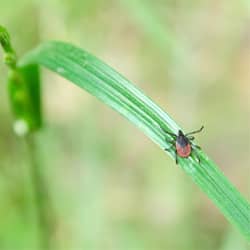 Massachusetts is one of the flag ship states of the Eastern Seaboard. So much of our country’s history is here. From the Pilgrims landing in 1620 to the modern day hub of Boston, this state has so much to offer us all. It’s a great place to live, play and work. You can enjoy all that mother nature has to offer by experiencing four seasons here, winter sports and beauty, spring renewal, summer warmth and fun, and a cool fall with all its wondrous changing colors. Yes, Massachusetts has so much to offer. Unfortunately, it also has to offer ticks and all the issues that come along with them.

Ticks may seem like a small issue, but let us assure you, they should be on your radar. Ticks are not just a worry for dogs, deer and wildlife. They aren’t picky about who and what they attach to for their next blood meal. Spreading the seriousness of ticks and their potential for distributing disease, is one of the many reasons why next month, May 2015, is Lyme Disease Awareness Month. This worldwide event, sponsored by the Lyme Disease Foundation, is a campaign which promotes preventative measures that can be taken against Lyme disease. Lyme disease is a widespread disease that is passed around by the bite of an infected tick. The bacteria, Borrelia burdorferi, causes Lyme disease in people and animals. Lyme is an acute inflammatory disease that effects thousands of people around the world. Unfortunately the United States has seen an increase in its number of reported cases. Now, more than ever, knowledge of ticks, tick borne diseases and tick prevention is needed.

Another lesser known virus that is effecting Americans more and more each year is Powassan virus. This is also a tick-borne encephalitis (acute inflammation of the brain) virus, somewhat similar to Lyme disease. It is named for Powassan, Ontario, Canada where the virus was first recognized as a disease in 1958. In the past this virus was primarily contained in smaller mammals, like woodchucks, mice, squirrels and skunks. Unfortunately over the past decade the virus is starting to spread to humans. So much so, that in 2004, 2005 and 2006 there was only one case reported to the Center for Disease Control and Prevention, but in 2013 there were 12 confirmed and reported cases. This virus was centered in the great lakes region in the U.S. and Canada but seems to be heading into New England and down the Eastern Seaboard. Statistics from 2004-2013 show the following states and cases reported to the Center for Disease Control and Prevention:

Ticks are known carry many diseases and viruses. Here in the United States, the Center for Disease Control lists 14 pathogens that are known to cause disease in humans, http://www.cdc.gov/ticks/diseases/, including:

Now, the real question is what can you do to protect yourself and your loved ones from these disease spreading pests? The best form of protection will include preventative measures you take at home and services from a professional pest control company. Here at American Pest Solutions we know exactly how to help keep the tick exposure on your property down. Some simple preventative steps for you to take at home include:

For more in depth tips visit the CDC’s webpage at http://www.cdc.gov/ticks/avoid/on_people.html.

Ticks are a concern for people living in Massachusetts. Education and prevention partnered up with the right pest control company, like the professionals here at American Pest, is the key to life with as little exposure to these pests as possible.