The Problem With Stink Bugs On Your Western Massachusetts Property 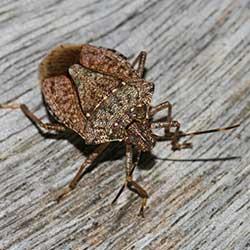 With a name like “stink bugs,” you know what you’re in for. These strange insects can make a surprise appearance indoors around the late winter and early spring and cause mayhem for farmers and gardeners in the summer. Not to mention, they smell pretty bad. To spare your plants and your nostrils from damage, it’s important to stop stink bug problems on your Western Massachusetts property before they get out of control.

What To Know About Stink Bugs

Stink bugs are an invasive insect introduced to the U.S. from Asia in the 1990s. They are shield-like in shape, with roughly the same proportions of length and width. There are many different species of stink bugs found in the United States, but the most troublesome, the brown marmorated stink bug (BMSB), can be recognized for its speckled brown color and 3/4 inch size.

The defining feature of these insects is their odor. When threatened or crushed, they release a potent smell that can linger for hours. It’s not necessarily the worst smell in the world, in fact, the strong cilantro scent is pleasant to some folks. But the power and longevity of the smell certainly earn stink bugs their name.

Stink bugs are often found in gardens and flowerbeds and amongst crops. However, they are also known to appear indoors at the first sign of warm weather following the winter months. They will hide in attics, wall voids, and crawlspaces and will seek to escape outdoors in spring.

Stink bugs are not dangerous to people or pets. They aren’t known to spread disease and won’t destroy personal property. These bugs can’t even deliver a bite strong enough to break human skin. The only real danger they pose to people is that pungent odor and the mental anguish of having stink bugs infesting your property.

However, stink bugs are a threat to the survival of crops and ornamental plants. They have evolved specialized mouthparts to poke through stems and roots and suck the vital juice from plants like a straw. They tend to infest in large numbers, and horticultural damage can be extensive.

As the seasons change, stink bugs will seek refuge indoors to survive the winter. Taking advantage of cracks in the foundation, tears in screens, and other entry points, these pests will secretly infiltrate homes and businesses and hide away in walls and attics until warm weather returns.

How To Prevent Stink Bugs

While stink bugs might not be the most dangerous pests, preventing them is still essential for your well-being. Some easy ways you can prevent stink bugs around your Western Massachusetts property include:

If you’re sick of stink bugs on your Western Massachusetts property, call the experts at American Pest Solutions. We’ll provide safe and effective home pest control treatments that targets stink bugs at the source and protects your property from future infestations. Get in touch with us today to learn more.