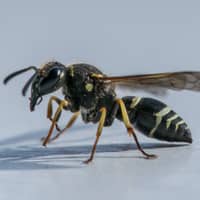 Stinging insects benefit people and the environment in many ways including pollinating a large variety of crops and flowers, reducing other insect populations, and producing delicious honey. However, the fact remains that most people do not want a nest of bees or wasps on their property, especially if it has been built close to or inside their home. And with good reason, most stinging insects will protect their nest with a painful sting. Unfortunately, some species can and will sting multiple times. This can prove dangerous for those allergic to stinging insects. Extreme caution should always be taken around bees, wasps, and other stinging insects.

Both bees and wasps are a problem for homeowners in our region; honey bees, yellowjackets, and paper wasps are the ones we often receive calls about.

Honey bees are very social insects and are one of the only types of social insects whose colony can survive for many years. Because of this honey bee colonies can grow very large. This type of bee is responsible for pollinating more than 100 crops in the U.S. alone and is a very important part of the eco-system. However, if their nest is built too close to your home it should be removed, honey bees are not particularly aggressive but will defend their nest and deliver a painful sting. Honey bees make their nests in a variety of places including tree crevices, logs, chimneys, and behind wall voids and attics.

Yellowjackets are a type of wasp that lives in large colonies. It’s not uncommon to have a colony with thousands of workers. Yellowjackets are extremely territorial and aggressive meaning they will not hesitate to sting in order to defend their nest. These wasps nest in the ground but also in large spaces such as attics and wall voids. Late summer and early fall is when you're likely to see even more yellowjacket activity and that’s because their numbers are so large and the food supply is limited. They’ll start looking for food and that often includes sweets and proteins found at barbecues, picnics, and other outdoor gatherings.

Paper wasps are semi-social insects that tend to live in relatively small colonies. Paper wasps create their comb-shaped nests with a mixture of saliva and plant materials, giving the nest a paper-like appearance. Paper wasps are not overly aggressive but will defend their nests with a painful sting if they feel threatened. And speaking of nests, paper wasp nests are often hanging from tree branches or built in shrubs, door frames, porches, ceilings, soffits, and attic rafters.

Getting Rid Of Bees & Wasps

If you’re thinking about getting rid of a bee or wasp nest on your own, we’d advise against that. A professional exterminator that specializes in bee and wasp control should be contacted to safely and completely get rid of nests on your property. Tackling this type of job on your own is likely to end in painful welts. For more information on how American Pest Solutions can help you with bee and wasp removal, please contact us.

Are Bees and Wasps Dangerous to New England Homeowners and Pets?

Damage Carpenter Bees Can Cause

The Problem With Honey Bees

What Homeowners Should Know About Paper Wasps


Seeing yellow jackets in the house? This customer found quite the surprise when he lifted that ceiling tile in the basement... This is a great example of when self treating goes wrong. Call the good guys who are trained to deal with these extreme cases.