If It's Broke, Fix It 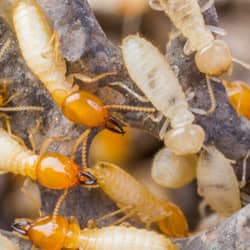 Have you heard the saying, "If it ain't broke, don't fix it?" Well, maybe you've heard the less common saying: "If it's broke. Fix it." This is easy for some things, things that are easy to see or hear. Take a broken step for example. You step on it, you see it's broken, so you do a little research on the internet--or perhaps ask a friend--and take measures to fix the problem. Maybe you find out your roof is leaking. You have a heavy rainstorm, and you see water dripping into your living room. Again, you take measures to fix the leak. How about a car with a worn out fan belt, that's a problem you can hear easily. But what about things that are broken, but you don't know they are broken? What if the broken thing can't be seen or heard?

Silence is Golden. Or is it?

Surely you have heard the saying, "Silence is golden." Well, that may be true in some instances, but it certainly isn't true when it comes to termites. You see, termites can cause your house to be "broken," but you may never hear or see a thing until it is too late. This is why termites are often called "silent destroyers."

How fast do termites eat wood?

Termites have special enzymes, protozoa, and bacteria in their guts that allow them to digest cellulose, the organic fibrous material in wood. It has been calculated that it would take a single termite approximately 3,000 years to eat all the wood in a 1,000 square foot house. The problem is termites don't live alone! Termites live in colonies that range anywhere from a few thousand individual termites, to several million, depending on what species we are talking about. And since termites never stop multiplying, it may not take very long for them to do serious damage to your home.

While there are some things you can be on the lookout for in regards to termites, the best way to know for sure if your home is being eaten out from under you is to get a professional termite service. Here at American Pest Solutions, we detect termite activity by using monitoring and baiting systems in and around your home. As worker termites pass these stations, they ingest a growth inhibitor and take it back to their colony on their bodies where other termites also ingest it. Over time, both foraging termites and the entire colony are wiped out.

Another tool we use is liquid termiticide treatment. This liquid is applied around your house which causes termites to pass through it as they travel from their colony to your home. Over time, this powerful termite killer will be transported to all the termites of the colony, and the colony will die.

Keep in mind that silence is not always golden. If you would like to know for certain whether or not termites are eating away at your home, American Pest Solutions will be happy to help. Not only will we find out if it's broke, but we'll fix it if it is. Don't let silent destroyers damage your home for years, until it is too late. Give us a call today!

American Pest Solutions received an average rating of 4.9 out of 5 stars from 238 reviews. 4.9