Home › Blog › Are You Struggling With Stink Bugs In Western Massachusetts?

Are You Struggling With Stink Bugs In Western Massachusetts? 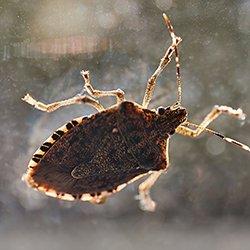 Insects and creatures are many things, but innocent isn’t one. It’s challenging to find a species that doesn’t carry germs or diseases. Many can scratch, bite, or sting. Several can ruin properties and belongings. Risk levels are higher when a population multiplies and is hard to eliminate. You must have pest control in Western Massachusetts. Brown marmorated stink bugs are especially tough to beat.

Stink bugs in Western Massachusetts are rampant. It’s not common knowledge how to handle them. The average person is unfamiliar with stink bug treatment patterns, hazards, and techniques. You can learn about all of this now. Our offerings at American Pest Solutions are the best way to kill stink bugs.

Should I Be Worried About Stink Bugs in Western Massachusetts?

Fortunately, brown marmorated stink bugs do not transmit diseases. They also aren’t a threat to domestic animals or structures. However, they aren’t good for gardens, plants, trees, and crops. These pests have sharp mouthparts that they use to drink the substances of vegetables, fruit, and organic matter. They will damage landscaping and food-bearing greenery.

Some of the other things stink bugs in Western Massachusetts consume are:

A stink bug invasion is particularly a hassle for horticulturists and agricultural industries.

What Bugs Are Often Mistaken For Stink Bugs?

Western conifer seed, box elder, and kissing bugs are usually mistaken for the stink species. They have similar appearances and can be rather smelly. The first two are unable to bite. Kissing critters have distinguishing yellow, red, or orange markings.

Stink bugs aren’t native to the United States despite their prevalence. Through shipping crates and machinery, these insects migrated from Asia during the 1990s. Regarding their size, they’re 0.46 to 0.67 of an inch long. Their bodies look like shields, while stripes appear on their antennas. Metallic punctures that are blue or copper decorate their heads and pronotum. On their two wings are dark bands, and six legs surround their figures. Their white or yellow young have red eyes.

Why Do I Suddenly Have Stink Bugs In My Home?

Stink bug problems typically begin in cooler months, as insects seek shelter. Their entry points will be cracks in foundations, screens, windows, doors, and siding. You might see groups of them around attics, crawlspaces, walls, and voids, and lights attract them as well. Stink bug invasions are humongous because they travel in masses. While they naturally emit odors, it’s more pungent when they die.

If stink bugs remain outside, they’ll overwinter in a ditch or under a deck. Weeds, rocks, and ground cover will be suitable to them too. They’re definitely inside your domicile or establishment if you see them on warmer days. You will find their eggs in greenery, and the nymphs readily eat the material.

The Best Way To Keep Stink Bugs Out Of Your Home

Commercial insecticides and “do it yourself” products won’t fix your stink bug problem; these items weren't crafted for infestations. They’re also costly and toxic

Do the following instead:

We at American Pest Solutions have advanced stink bug treatments that are safe and affordable. A certified entomologist outlined our industrial-grade approaches. It’s the best way to kill stink bugs! Call us today for a free evaluation!