Home › Blog › Why Are There Spiders In My Hartford Home?

Why Are There Spiders In My Hartford Home? 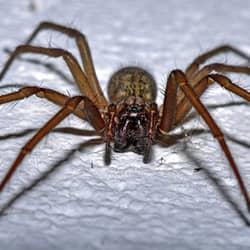 Whether crawling on their eight legs or leaving webs for you to walk through, spiders are rarely a welcome visitor. While most people think of them as terrifying creatures that should only be seen as part of a Halloween display or in a horror movie, the truth is most spiders in Connecticut are relatively harmless.

While most spider bites will result in some pain and itchiness, of the more than twenty species of spider in the Hartford area, only the black widow has a potentially fatal bite. In many cases, spiders actually help control the population of other pests like flies and ants.

While most spiders in Hartford are harmless, it is helpful to be able to identify some of the most common spiders you will see in your Connecticut home:

The Problem With A Spider Problem

While having a spider problem in your home is bad enough, the reason for the spider infestation is a cause for concern all on its own. While some spiders spend their entire lives indoors, many spiders enter your home because of an existing pest problem. Ants, mosquitoes, moths, and other insects are all prey for a spider. If you have an existing pest problem in your home, chances are you will end up with a spider problem if you don’t take care of it.

How To Prevent Spiders In Your Home

Even if most spiders found in the area aren’t poisonous, no one wants spiders in their home.  Here are a few tips to help keep spiders and the pests that attract them outside:

If you follow these tips and still find yourself with a spider problem, contact the professionals at American Pest Solutions.  With almost 100 years of pest control experience in the Hartford, CT, area, we can help make your spider problem disappear.

American Pest Solutions received an average rating of 4.7 out of 5 stars from 261 reviews. 4.7