Home › Blog › What Do Bed Bugs Look Like In Hartford? 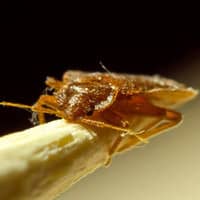 There are over 90 species of small blood-sucking parasites, known as Cimicidae, in the world. This is the family of insects bed bugs come from. But, of these 90 species, only three feed on humans. They are Cimex hemipterus, Leptocimex boueti, and Cimex lectularius.

Cimex hemipterus is a bug found in the tropics, but in recent years, the states of Florida and California have had some dealings with these blood-eating bugs. Leptocimex boueti are not found in the United States at all. That leaves Cimex lectularius, also referred to as the common bed bug. Why does it have "common" in its name? Because it is a global scourge that can be found everywhere, including Hartford, Connecticut.

Cimex lectularius can look differently depending on when you see it. This bug goes through five stages of development (called instars) before it reaches its adult stage. But, in all stages, they will have all the characteristics of an insect. That means two antennae, six legs, and three body parts (although in early instars they appear to only be a head and a body, and as a full adult, it can be difficult to differentiate where the head is.)

In the first instar, bed bugs will have an appearance that is more pale in coloring, not that you'll be able to tell easily. They can be as small as a spec. If, however, you are able to see them with some form of magnification, they may also be red in their thorax, if they have had a blood meal.

In the second and third instars, bed bugs will begin to have more dark areas in their thorax and abdomen, and they will continue to seem somewhat transparent in places. If they have had a blood meal, they will appear darker.

In the fourth and fifth instars, bed bugs will start to take on some of the reddish coloring they will have as an adult, but they will still be primarily tan.

When bed bugs become adults, they have the distinct appearance most of us recognize as bed bugs. They are oval in shape, rust colored, shiny, and have horizontal bands across their abdomens. Their abdomen is significantly larger than their other body parts and is the portion that fills with blood. After feeding, bed bugs no longer look flat, but have a rounded "pill" shape to their body. It is important to understand that this change in shape happens in all stages of development.

Learning to identify bed bugs is vital in preventing the spread of these blood-eating pests. And, if we all keep watch and know what these bugs look like, we have a better chance of keeping them from coming back with us to our homes. Stay vigilant and stay protected. Bed bugs are not something you ever want to have living in your home.