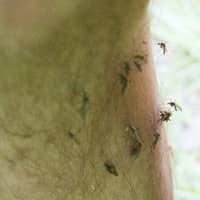 Mosquitoes are a pain--quite literally. They drive us crazy every morning, every evening, and twice as bad after it rains. They come to bite us on our decks, they stick us with their needles while we're relaxing by the pool, and they torment us while we're trying to enjoy those few precious summer cookouts we're allowed to have between winters. And, that's just at home! If you own a camp, it is even worse. After a week of camp, you could come back with as many as 50 bites! The question is: can you afford to get all those bites?

Massachusetts is a pretty big state; so, where was this mosquito found? This little virus spreader was collected July 8th in Sheffield, Mass. That means, if you live in Western Mass, you're going to want to take extra precaution. West Nile virus causes flu-like symptoms for most, but less than 1 percent of the people infected can develop serious neurological illnesses such as encephalitis or meningitis.

When Mass mosquitoes come out en masse it isn't just a pain, it can be dangerous. Protect yourself from summer bites. The wrong bite will leave you with more than just an irritating bump.

American Pest Solutions received an average rating of 4.7 out of 5 stars from 148 reviews. 4.7