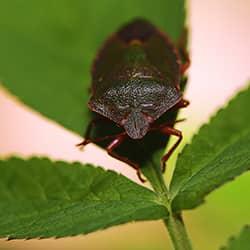 There’s something about fall that makes some people want to pull out all of their scented candles, isn't there? Freshly pressed apple cider, pumpkin spice, cinnamon and clove, stink bug… Wait, what? Stink bug?

While there is much to love about autumn, the smell of stink bugs that have invaded your property and home is not one of them. Unfortunately, at this time of year, the possibility of a stink bug invasion is all too real. With all the benefits of fall also comes the threat of a stink bug infestation.

Stink bugs hatch in the summertime and go through several stages of development before reaching adulthood in late summer or early fall. At this time they begin to look for shelter in homes and buildings in order to survive until the next summer when they can lay their own eggs.

As their name suggests, the biggest problem with stink bugs is their smell. Specialized glands below their thorax emit a foul-smelling odor when they are threatened or squashed. While one stink bug can be bad enough on its own, if you end up with a large number of them in your home, the smell can be overpowering.

If you have a garden or do larger-scale farming, stink bugs can be a problem due to their diets. Stink bugs feed on the juice from apples, tomatoes, peppers, soybeans, and other crops. They have mouthparts that pierce the skin of the fruit or vegetable and suck the moisture out. This damages crops. And if the stink bug population is large enough that damage can be costly.

Even if you don’t grow your own food, if stink bugs get into your home for the winter, they’ll need a food source. You could end up wasting a lot of money on groceries that stink bugs ruin.

In order to prevent stink bugs from entering your home, it’s important that you seal every crack, crevice, and hole you can find around your house. This includes around your foundation, on your walls, in screens, and on and around windows and doors.

Keeping moisture levels under control on your property is another way to discourage stink bugs from visiting. Like many pests, stink bugs prefer moist settings, so maintaining proper drainage, not allowing puddles to form, and keeping gutters clear can help keep them away.

Stink bugs are also attracted to light, so you may want to consider drawing shades and curtains at night, as well as using yellow insect-resistant lights outside instead of white lights.

Even with these precautions, stink bugs can find ways into your home. Even the most detailed inspection of your home can result in missing points of entry.

Fortunately, the professionals at American Pest Solutions do think like stink bugs. We have over 100 years of experience treating homes for a number of pests so we know exactly what to look for when working to keep your home protected. We can administer a barrier treatment that will strengthen weak spots in your home’s defenses.

Instead of worrying about stink bugs this fall, give us a call. We’ll take care of the stink bugs so you can get back to important things, like choosing which fall scent to enjoy next.