Are Stink Bugs In Springfield Dangerous? 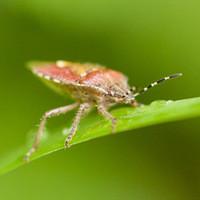 You may not know this, but stink bugs are year-round pests. You just aren't likely to see them around your home until fall. During the summer months, stink bugs terrorize farmers by destroying their crops. It’s not until the weather cools down, that these pests start to think about invading homes. Why do stink bugs invade homes, and are they dangerous? We will be talking about this today. Here is everything you need to know about stink bugs around Springfield.

What Are Brown Marmorated Stink Bugs?

The brown marmorated stink bug is not a pest indigenous to the United States. They were most likely brought over sometime in the mid-1990s from Eastern Asia. First introduced in Pennsylvania, stink bugs have spread to over 44 states in the past 24 years.

Brown marmorated stink bugs are identified by their mottled greyish-brown shield-shaped bodies and long straight antennae. During the summer months, stink bugs are agricultural pests that mainly destroy crops of fruit trees. As temperatures cool in the fall, stink bugs will begin to look for warmth around Springfield property homes. What starts with sunbathing on exterior walls quickly turns into invading indoors. Once inside, problems will begin.

If stink bugs have already invaded your home, do your best not to interact with them directly. To safely remove one or two from your home, we recommend using an empty vacuum and releasing them outdoors. For larger infestations, you are going to want to give a professional a call, as this is the only fast and reliable way to remove stink bugs from your home.

Stink bugs are not capable of spreading dangerous diseases, they do not bite or sting, and they rarely damage personal property. The biggest problem these pests cause is with their stench. When squished or threatened, stink bugs will release an unpleasant odor very similar to that of cilantro. These smelly invaders are also extremely annoying to deal with, loudly buzzing around homes, landing on tv screens, and generally getting into places they don’t belong. Stink bugs may also damage plant life in and around your home.

To seal off your home from stink bugs, here are some prevention tips we recommend.

The less opportunity stink bugs have to invade your home this fall, the less likely you will be to deal with an infestation indoors.

A Simpler And More Effective Method For Handling Stink Bugs

Don’t have time for preventing stink bugs or looking for an easier solution to keep them out of your home this fall? We offer quality stink bug treatments here at American Pest Solutions. Our team is highly trained and equipped with the right tools to handle any pest problem you and your home are facing.

Give us a call today if you want to find out what affordable and reliable pest control services look like for your Springfield home and property.

American Pest Solutions received an average rating of 4.9 out of 5 stars from 238 reviews. 4.9