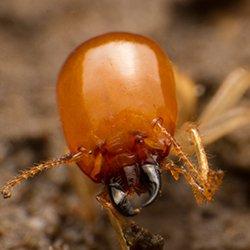 Termites are interesting pests that many Hartford property owners dread finding in their home or business. There are many things you might have heard about these wood-destroying insects, such as the idea that they create about 5 billion dollars worth of damage for American property owners annually, or that termites are capable of collapsing entire structures if they’re given enough time. But today we will be discussing a few things you may not know about termites.

What is a detritivore? We’ve all heard about carnivores, omnivores, and herbivores, but for many, detritivore is a new term. A detritivore is an organism that feeds on decaying organic matter. Some detritivores consume carcasses, while others will feed on feces. Termites are detritivores that feed on plant matter, (wood in particular). Detritivores play a very important part in the ecosystem by consuming and breaking down decaying organic matter. Termites are important in nature, where they decompose rotting wooden materials and are beneficial to the environment. But they are nothing but trouble when they invade Hartford properties.

2. Termites Have a Caste System

There are three castes in the simplified model of a termite colony: workers, soldiers, and reproductives. Each of the castes in a termite colony has a different role. Worker termites are responsible for tunneling, creating nesting galleries, feeding their colonies, and locating food sources, along with several other tasks. Workers are on the bottom of the termite social hierarchy, although their role is an important part of the caste system. Soldier termites are one step higher than workers when it comes to their rank. Their job is to defend the colony from threats and potential predators. These termites have large, dark heads and mandibles used for fighting. Reproductive termites hold the highest position in the termite caste system. These winged termites are only born once the termite colony has matured and is ready to create a satellite colony somewhere nearby. After swarming in warm weather, male and female reproductive termites pair up and lose their wings. These reproductives become new kings and queens of new termite colonies.

As the sole providers for their colonies, worker termites are the only termites that eat through the structure of Hartford homes and businesses. Worker termites are the largest group in the termite caste system, and they are the cause of major structural damage in many properties. These busy workers eat the wood they tunnel through, then feed the digested cellulose to the rest of the colony. If you’re noticing termite damage on your Hartford property, you can blame worker termites for it.

4. Termites are Related to Cockroaches

While this strange fact might seem like a long shot, it’s actually true. Like cockroaches, termites are members of the order Blattodea. Termites have been called “white ants” for quite a long time, but new genetic research has shown that termites are related to cockroaches. One of the main differences between cockroaches and termites is their social structure. Cockroaches and termites are social insects, however, termite social structures are much more complex. Within the order Blattodea, termites are separated into approximately 3,100 different species, although only 3 species are known for commonly infesting homes and business

5. Termites are Important in Certain Cultures

In some areas of the world, termites are known for their cultural significance. In some cultures, termites are considered a delicacy and are a great protein source. Termites have been consumed for many years in certain parts of the world, and this practice has become more popular in recent years. Other cultures have used termites in traditional medicines for treating a variety of illnesses that affect humans.

There are many interesting facts you can learn about termites, but it’s still important to seek professional help if you believe termites have infested your home or business. For more answers about termite problems, or to schedule a termite inspection for your Hartford property, contact American Pest Solutions today.